Today was a long drive and a bit hard on my nerves. More on that in a bit. Our plan today was to take Route 66 from Holbrook to Williams and then head up Highway 64 to the south rim of the Grand Canyon and then back down to Williams. This we did. Quite a bit of today's driving was on the Interstate. That's not a problem but we prefer the old road. There will be plenty of that in the days ahead! We went to bed last night with a thunderstorm outside. That was the third night on this trip we have had that. Our days have all been dry. When we got up this morning, the rain had stopped but the temperatures were still cool. A mild day is okay with me. As we headed north on Highway 64, the temperatures went up as the skies got sunnier. By the time we got to the long line at the entrance to the Grand Canyon, I was pretty toasty. The Mustang was not happy to be idling in a 40-minute wait to get into the park. We were also low on gas. Once we got in, there was no place to park. (This is the hard-on-my-nerves bit I mentioned.) Ultimately, we did find a place to park, selected by the car when the engine died. A short walk later, we were on the rim of the Grand Canyon. I have to say, that's the biggest canyon I have ever seen. No wonder it has such a clever name. We took some photos but as I have been told in the past, you really have to see it to believe it.
- Seth!

P.S. The reason we were low on gasoline is that I use a fuel additive that is supposed to go in when the tank is near empty. It's a balancing act that sometimes gets a bit shaky.

We left Holbrook early and were soon waving goodbye to it as we drove into the sunrise. (Although in the opposite direction.) Our first stop of the day was the Jackrabbit Trading Post. As we waited out the 15 minutes before they opened, I rode a giant jackrabbit. Inside, the large curio shop was a vast array of souvenirs. Further on, in Winslow, Arizona, we stood on the corner, with "Take it Easy" wafting through the busy square. The next stop was Meteor Crater, the most well preserved impact site in the world. We continued on, through the ghostly, haunting ruins of Two Guns and Twin Arrows. We didn't forget Winona as we went on down the road. We made a long loop up to the Grand Canyon. Our painful wait in line was rewarded by the magnificent views of the canyon. Down in Williams, Arizona, we are lodged at the Canyon Motel and Railroad RV Park. Our room is a 1940s flagstone cabin.

- Adrian
Below: Adrian on the corner of Winslow, Arizona
Bottom: Remains of Twin Arrows Trading Post 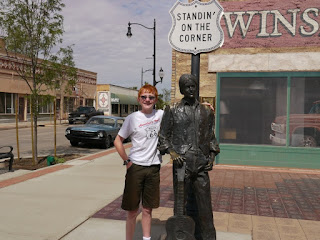 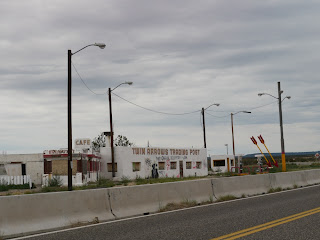 Photo albums of our journey